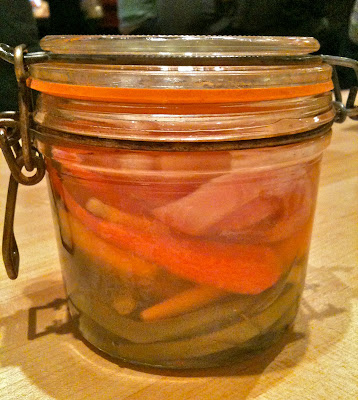 My new years resolution is to post more often. I know I have been a slacker these past months with my infrequent posts. I vow to return to the kitchen soon, armed with the dozens of empty jars awaiting me in my garage.

I just returned from New York where I ate some fantastic food, the most exciting at chef David Chang's Momofuku dynasty. I ate at both Ssan Bar and Noodle House in the East Village and even managed to squeeze in a stop at Milk Bar for the ice cream which my daughter and I fought over despite the sub-zero weather. The cereal milk  soft serve ice cream truly is off the hook and worthy of all the praise heaped on it. The chocolate chip, marshmallow, cornflake cookies were insane and I don't even like cookies. Just the right balance of crispy, chewy, salty and sweet without being the least bit cloying.


Pictured above are the pickles from Noodle House, on the menu as a starter. Served in a mason jar, I'll take them any day over a bread basket. Let's start a new movement, pickles instead of bread. Who wants to fill up on dough before a good meal? Pickles pique the appetite without dulling it.

Fresh, crisp and crunchy the Momofuku pickles are delish, the flavor of each vegetable distinct. The waitress told me each vegetable is brined individually and then combined for serving.


Using rice vinegar as opposed to cider or wine vinegar, produces a delicate brine that doesn't overwhelm and allows each vegetable to sing. Asian pickles are my new obsession, they are light, sweet, and tangy, perfect for the new year.

Below is David Chang's recipe as published in 2007 in Gourmet Magazine. 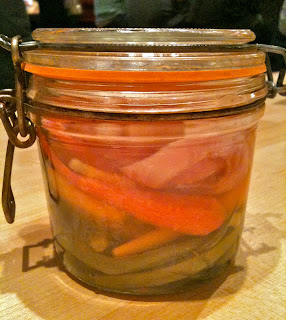